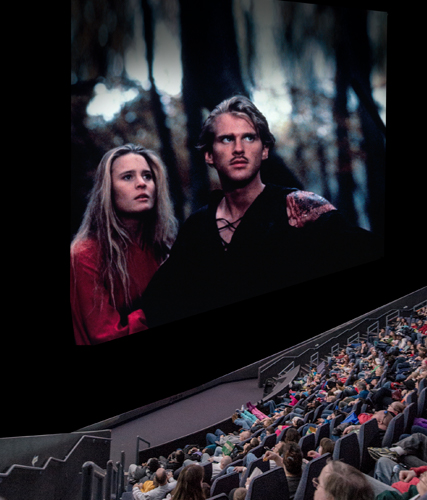 CLEVELAND (November 30, 2016) – Great Lakes Science Center continues to celebrate the grand re-opening of the Cleveland Clinic DOME Theater with Take Two! Double Features at the DOME – an all-new series of classic movies being held one Saturday a month starting January 28.

The digital conversion and interior remodeling of the former OMNIMAX Theater was completed in October, and as part of the projection system upgrades, the theater can now show movies from any digital source, as opposed to films available only in 15/70 mm film prints.

The series begins Saturday, January 28 with a tribute to Jim Henson and his two classic ‘80s movies, “Labyrinth” at 6 p.m. and “The Dark Crystal” at 8 p.m.

Saturday, February 25 brings a Valentine’s Day favorite, the endlessly quotable “The Princess Bride” at 6 p.m. followed by the Stephen King classic “Stand by Me” at 8 p.m.

After such an exciting baseball season, lots of people will be looking forward to spring training and the start of pre-season games. Get ready for another year with the Tribe by catching “The Sandlot” at 6 p.m. Saturday, March 25 followed at 8 p.m. by “A League of Their Own.”

April celebrates National Inventor’s Month with two of the silver screen’s most memorable mad geniuses, Doc Brown in “Back to the Future” at 6 p.m. Saturday, April 22 and Tony Stark in the original “Iron Man” at 8 p.m.

All eight films will be shown using the theater’s new 4k high resolution digital projector and 11,600 watt digital sound system. Beer, wine and other concessions will be available. Tickets for all eight features go on sale Monday, December 5 and will be available online at GreatScience.com or by phone at 216-621-2400. The Science Center’s new ticketing system will allow guests to choose their seat in advance for the first time!

Tickets are $10 for a single movie, $9 per movie for two or more movies purchased together, or $55 for a series ticket to all eight movies. Discounted parking is also available for $7 per night or $21 for all four nights (when purchased in advance).

Tickets are on sale now for the Science Center’s holiday season tradition -- Pajama-rama -- on Saturday, December 10 and Saturday, December 17 featuring “Frozen.” Start a new family tradition and wear your pajamas to the theater to see this animated fan favorite. A hot cocoa bar and snacks will be available before the movie. Tickets are $16 per person ($12 for members) for the Pajama-rama screenings and include refreshments. Tickets for Pajama-rama are available by phone at 216-621-2400 and online at GreatScience.com.

(Editor’s note: Fall/winter hours are Tuesday through Saturday, 10 a.m. to 5 p.m. and Sundays from noon to 5 p.m. The Science Center is closed on Christmas Day, Mondays and during all Cleveland Browns home games.)