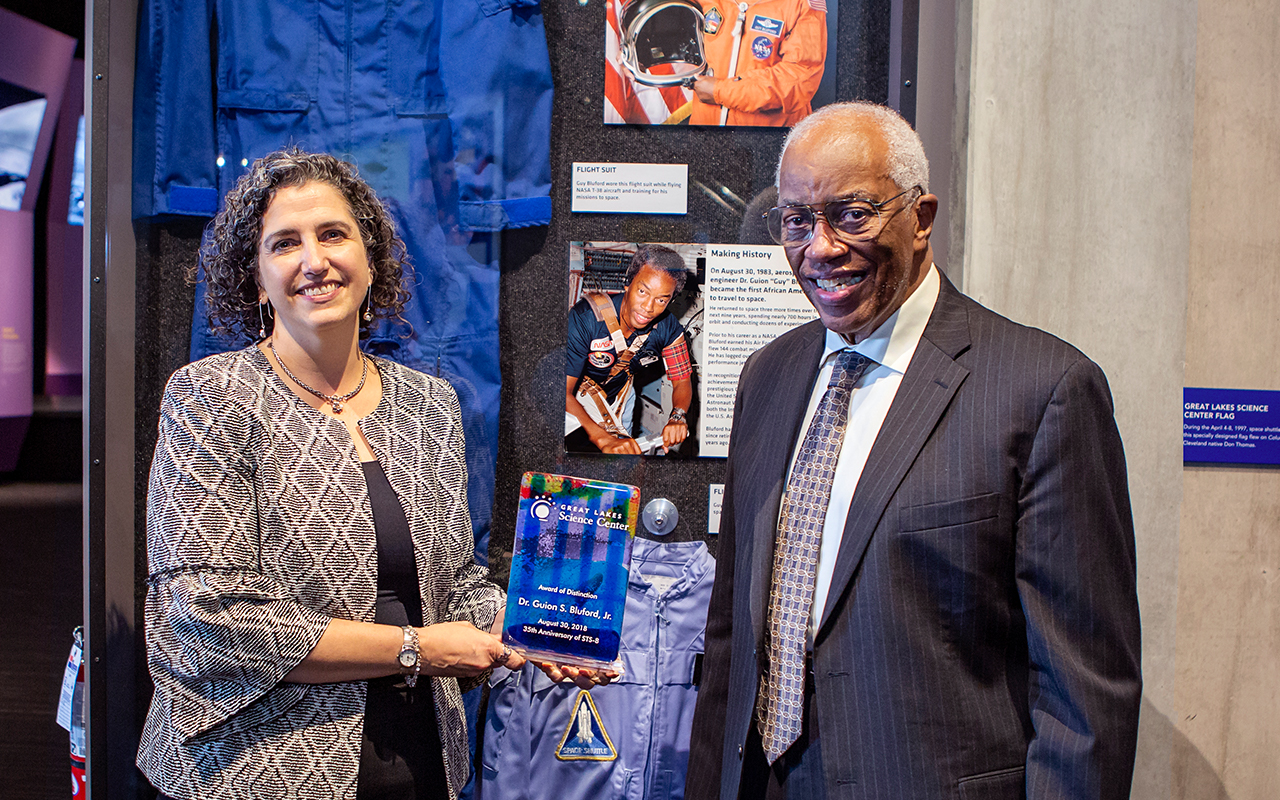 We honor astronaut Guy Bluford, first African-American in space, on 35th anniversary of his first flight

Home
About / Media & Press
We honor astronaut Guy Bluford, first African-American in space, on 35th anniversary of his first flight

CLEVELAND, OH (August 30, 2018) – Great Lakes Science Center today honored retired Air Force officer, astronaut and aerospace executive Dr. Guion S. Bluford, Jr. with a special Award of Distinction, and unveiled an exhibit dedicated to him in the NASA Glenn Visitor Center. Today marks the 35th anniversary of Bluford’s first space shuttle flight, which not only launched him into orbit, but into the history books as well as the first African-American in space.

On August 30, 1983, STS-8, a space shuttle Challenger mission, took off from NASA’s Kennedy Space Center in Florida. It carried Bluford and four other astronauts on a mission with international ties into orbit around the Earth. The crew deployed the Indian National Satellite (INSAT-1B) and operated a Canadian-built remote manipulator system. The shuttle completed 98 orbits around the Earth before landing at Edwards Air Force Base in southern California.

Bluford went on to fly on three additional shuttle missions, including two aboard the space shuttle Discovery, and then a successful career as an aerospace executive supporting the NASA Glenn Research Center.

In honor of this historic occasion, Bluford, a longtime resident of Northeast Ohio, spent this morning at the Science Center visiting with Cleveland Municipal School District ninth graders from the on-site MC2 STEM High School, followed by a program in the Cleveland Clinic DOME Theater where he was interviewed by Ideastream’s Rick Jackson.

The Science Center unveiled the exhibit, which included personal memorabilia provided by Bluford, and presented him with the Award of Distinction in the NASA Glenn Visitor Center after the program in the theater. The U.S. Navy Ceremonial Guard performed an honorary drill on the Science Center’s outdoor terrace overlooking the harbor and Bluford made time to sign autographs and meet guests after the event.